We live in a crazy world. With all the demands for a nanosecond of our attention spans, it’s easy to tune out, shut down or narrow our focus. As writers, however, we have to open up. Open our eyes. Our ears. Our noses. Our hearts (Okay, not literally, please!). Stories are everywhere—from a walk in the woods, to an encounter in the supermarket, to conventional writing prompts.

When I look over the stories I’ve written and my few recent attempts at poetry, I find my inspiration is as loopy as my personality. A painting. A wacky get-rich-quick scheme a friend once told me about. A childhood memory. A dream. An incident that occurred on vacation. A woman selling Tupperware at a craft fair. Can you tell I’m a Gemini?

No matter what sparks the inspiration, immediately, visuals form. The characters take shape. I see how they dress, their quirks and habits. I see their environment. I know what’s in their refrigerators and what’s tossed in the back of their closets.

Writing exercises challenge me to be bold, to take chances in my writing.
Surprisingly, writing prompts have triggered several stories that I would never have thought to write. Some have taken me out of the safe “write what you know” mode. Really, would I have written about a troubled twelve-year-old boy from New York who thinks his southern holy-roller aunt’s neighbor is a vampire, if instructor Cindy Ramsey hadn’t handed me an envelope containing a mish-mash of magazine pictures, phrases and numbers, all of which had to be used in the story organically? Perhaps the piece wasn’t one of my shining moments, but it sure was fun to write. The painting I mentioned earlier was a student work depicting a bluegrass band. In this case, I did refer to my own life experience in part. I turned them into a Jazz band performing in a Coney Island club.

Last month, I attended the Isothermal Community College Writers’ Workshop where novelist Kim Church presented a class on developing authentic characters. The exercise she had us do was simple, but featured a clever and inspiring twist. She handed out photos she’d taken, but these were no ordinary snapshots. They were vague, mysterious. You might see someone’s elbow and another person’s shoulder, but no faces. Some were out of focus, downright blurry or taken at quirky angles. They invited imagination. My picture, a shot of a dog in a car with his paw on the driver’s side window, was probably one of the more literal photos in the batch, but still it was intriguing. Where is this car parked? What or who is the dog looking at that caused him to paw the window? Who is his human? The car looked beat up. What kind of person owns that car? That dog? Did the car smell like cigarettes and wet dog? Spring Breeze air freshener? The windows were up, so was it cold outside? If not, why would the owner leave a dog in a hot car? Where did this person go?

Fire up your imagination.
Here’s a pic I took. Start a story in a few sentences. Write a few lines of a poem. Write lyrics to a song. Write part of a scene for a play or screenplay. Post your brilliance in the comments field. This is not a contest. You will win nothing tangible, except praise and admiration from me and others who read our blog. You might, however, begin a new work and be inspired to complete it. 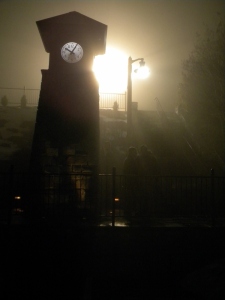 This entry was posted on April 25, 2012, 12:26 am and is filed under Darlene, What inspires me. You can follow any responses to this entry through RSS 2.0. You can leave a response, or trackback from your own site.