What makes it to the page and how it gets there 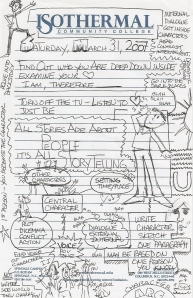 Notes from a workshop

Last month I performed a stunning, acrobatic, unscheduled dismount from my horse. If anyone had been there to witness this feat, I’m sure they would have been amazed at the grace this middle-aged woman of somewhat substantial weight displayed, as I was flung into the air at a surprising velocity—probably wailing a litany of less than lady-like words. I have no memory. I know I landed in a broken heap. I know I was holding my cell phone when I regained consciousness, having answered a call. Almost a month and a half, two surgeries clamping together multiple ribs and my collar bone with titanium, and countless procedures later, I’m back at my desk, not moving so hot, but the fingers can type. I haven’t given much thought to writing during this time. I’d asked a friend to bring my laptop to the hospital, but just as quickly told her to take it away.

I missed going off on some wacky writer tangent here, but I simply didn’t have the energy. I’m grateful to my fellow bloggers for picking up my slack by posting many intriguing and insightful essays and commentaries. So, as for throwing words together, I’m starting fresh right this minute with this post.

The How: I got my first staff job in advertising in the late seventies. As a writer, you knew you’d made it if you got a couch in your office (yes, I said office—even as a junior!) and an IBM Selectric typewriter. I wrote everything longhand in those days. When I got the ad, radio or television script revised the way I liked it, I typed it, handed it to my supervisor who would then cross most of it out, or in the case of one manager, slice the page in half with a scissor. You learn to edit fast when you have to tell a story in 28 seconds. Writing for the web, now, we have even fewer words to convey our messages. The thought of typing my copy from first draft to finish scared me, even when offices introduced computers.

As a fiction writer, today, however, I rarely put actual pen to actual paper. It’s too slow for me. My mind sometimes starts revising before I’ve scribbled the sentence. My fingers, can zip across the keyboard and keep up with my kooky thoughts most of the time. Yes, I’ll thank my grandmother for insisting I take secretarial classes in high school, grudgingly, though my gratitude may be. Typing is one of the most practical skills I ever learned.

I know many writers wax poetic about the feel of the pen gliding across the paper. I agree. I love good paper. I could lose myself in a stationary store for hours. If I go to a bookstore on the same day, my family would file a missing persons report! I have way more notebooks, journals and old fashioned composition books than I can fill in a lifetime, and I’m terribly picky about my pens, but I’m more apt to doodle or draw cartoons in those pages than write anything more than a few sentences or random lines and ideas.

The What: Well, I mentioned dear grandma earlier. Okay, get ready for a real shock. I come from a totally, dysfunctional family. My extended family seems normal and sane, but our little corner of Brooklyn housed the crazies, for sure! So after suffering through the angst-ridden, woe-is-me, teen years I started examining, looking closer at relationships and how they evolved (or devolved), how people affected each other, how they hurt and loved each other. Fascinating stuff. Many of my longer stories probe these kinds of relationships, some through humor others in a darker tone. My characters usually come first. I may get a rough idea from a woman I see in the pet food aisle at the supermarket, a guy smoking outside a coffee shop or someone’s quirky habit I find amusing. As I start to get to know the characters, what motivates them, the things that shape their desires and the things they feel they have to prove, and how far they’ll go to get what they want, I see them in situations, locations. I feel their emotions and hear their thoughts. Soon a story begins to show itself.

Many years ago, I was in a wonderful improv group called Glue. We performed at Gotham City Improv in New York fairly regularly. Our shows tended to be funny, often poignant and occasionally, quite dramatic. Our director, Jane O’Leary proposed creating a scripted show developed out of improv. We spent several months simply developing characters until we each had three or four we could play. At one rehearsal, she called on our characters, and randomly threw them together in improvised scenes with little or no prompting. We stayed true to our characters and let their stories emerge completely spontaneously. We kept the scenes that worked well, and, Echoes, a two-hour show took shape. We never committed a word to paper. Our characters knew their parts. We played the scenes, sometimes slightly differently, at every performance. It was magic. Now, I just do it all on my computer screen.

This entry was posted on July 6, 2012, 1:12 am and is filed under Darlene, How I Write, What I Write. You can follow any responses to this entry through RSS 2.0. You can leave a response, or trackback from your own site.