The jeans were tight enough to be interesting but loose enough to put on – even if we had to lie down on the bed to zip them up.  The trick was to find a pair that would enable you to breathe – even if it was just a shallow breath.

That’s how I approach building a character.

If the characters aren’t fully developed, they aren’t interesting.  They can’t carry a story.  They don’t make you care.  But (and keep in mind this pertains only to scripts) if you overdevelop the character – describe every tic, insert every sigh, detail every facial expression – you don’t allow enough room for the actors to squeeze themselves into those Calvins.  And the collaborative spirit of theatre suffers.  Actors need to put on characters and fill them out in their own special way.  Bring some of who they are – of what they have been through – to each role.  Otherwise, what the point of different productions?  Why not just make a movie that is exactly the same every time you pop it into the DVD player?  (And this is not a slam against movies – just a reminder of the differences between recorded and live performances.)

A play isn’t finished when the final draft is spit out of the printer.  It’s not even complete when it’s published.  When the audience meets the characters in person – living, breathing people who draw you into the story – that’s when the play is on its way to the finish line.  (I count a play done only when I watch it and don’t make a single change.)

So what exactly do I mean by tight enough to be interesting, loose enough to fit in to?  Glad you asked.  Here’s an example from my play WORD WAR. 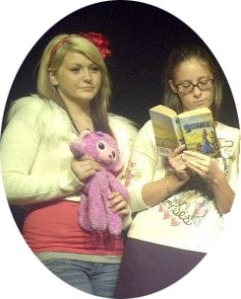 GRETCHEN:  That would be cheating.

GRETCHEN:  Do you want to get me in trouble?

GRETCHEN:  Maybe you want me to fail the class?

CICI:  You want to have a fight so badly that if you can’t have one with the other playwright, you’re going to pick one with me.  It’s okay.

GRETCHEN:  That’s not it.

GRETCHEN: I’m not trying to pick a fight.

CICI:  Now you’re in denial.  Gretchen, you are obsessed.  Or possessed.  Or repressed.  Or . . . whatever.  The point is, you’re going to sit here all night fixated on this play / instead of

GRETCHEN:  No I’m not.  I’m going to sit here and do nothing.

CICI:  Are you sure?

CICI:  Well, since you’re not doing anything, there’s this great party / you should go

I envisioned this exchange as CICI being a little apologetic in the beginning and when she reaches “Oh I get it”, she becomes excited about being able to use what she is learning in psych class.  And that’s exactly how everyone who has read the role has interpreted it . . . until the last production.  That actress chose to become weepy and hurt.  When she immediately rebounded to excitement on “Well, since you’re not doing anything . . .”, it was hysterical.  It was not what I intended or even imagined – it was better.  And that, for me, is one of the biggest thrills of theatre.

I love watching one of my plays and learning something new about a character.  When Eleanor pulled cigarettes out of her purse and began packing the smokes, I was amazed.  I had no idea she smoked.  But the actress playing her did.  Turns out the half-drunk bottle of Coke I assumed was on Freddie’s bookcase was actually hiding under the pile of dirty laundry the actor enthusiastically tossed around his dorm room during the search.  And, of course, Cynthia would wipe her fingers after each and every Cheese Doodle.  At least that incarnation of Cynthia.

The trick is – just like jean shopping – to find that balance between too tight and too loose.  And doing it over and over again with each character.  And then trusting and believing it’s right.

Right around the time I graduated from college someone told me to hold on to a favorite pair of jeans.  “You think you’re fat now.  But one day you will look at those jeans amazed at how skinny you were.”  Sometimes my characters are like that.  It is only down the road, when I’ve had a chance to see many different actors inhabit them, that I truly appreciate how pliable and how strong they are.

While googling for the picture at the top of this blog, I read that Brooke Shields could still fit into those Calvins.  After drowning my frustration in a bowl of ice cream – a luxury I clearly indulge in more than Brooke – I realized that I hope all my characters will someday be able to say the same thing.  They fit every actor that ever tries them on.  Whenever they try them on.

This entry was posted on September 26, 2012, 11:15 am and is filed under Character, Linda. You can follow any responses to this entry through RSS 2.0. You can leave a response, or trackback from your own site.