Working Within The Restrictions of Film Writing

More than any other form of writing, I believe that screenwriters, especially those writing for mainstream and not independent movies, have the most difficult time working within the constraints of their craft. I’m sure that haiku or Twitter fiction writers would disagree with me, but even with their restrictions, I don’t think they are anywhere near as limited as we are when we write for film. In fact, screenwriting comes with so many restrictions that it is often a bit of a culture shock for writers that come from other backgrounds. 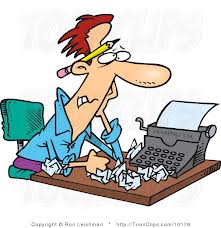 Here are just a few of the constraints that film writers must face and overcome in order to thrive and survive:

This is one that I’ve covered in past blogs, but it’s worth noting here as well. Anyone that has read the works of Syd Field (Screenplay, The Screenwriter’s Workbook, etc.) know that mainstream Hollywood films are almost always thought of in terms of a three act structure. While this concept can be confusing for novice screenwriters, the truth is that this paradigm is probably the easiest one to understand. At its core, the three act structure is just the Aritsotelian concept of beginning, middle and end. The story needs to have a start that sets up the action, it needs to have the main conflict, and it needs to have some kind of resolution. Easy, right?

Well, since Syd Field first introduced this simple yet structured concept to film writing, other industry professionals have made it a lot more complicated. Probably the most well-known structural format is the one created by Blake Snyder. First introduced in his book Save the Cat: The Only Book On Screenwriting You Will Ever Need, Snyder gives literally a step-by-step guide to how your story should unfold. With its very strict ideas of specific plot events needing to be introduced on a specific page (the catalyst on page 12, the B story introduced on page 30, etc.), it turns screenwriting into little more than a paint-by-numbers task. 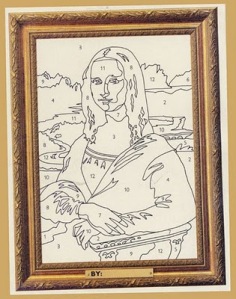 This method is fantastic for beginning writers that don’t quite understand how the rules for screenwriting work. It gives them a guide to creating well-paced stories that fall in line with an audience’s expectations of how a film “should” feel. The problem with this method, however, is that some writers have become so reliant on it, that many movies are feeling too predictable. While the Save the Cat method has been used to create some of the best films of recent years (see the beat sheet for Toy Story 3 here: http://www.writersstore.com/toy-story-3-save-the-cat-beat-sheet/), it also has produced a lot of duds that lack creativity.

This means that screenwriters have a really difficult challenge ahead of them in terms of structure. They need to be able to work within the strict paint-by-numbers formula expected by the producers that buy their screenplays, but they also have to find a way to be unique while working within that formula. 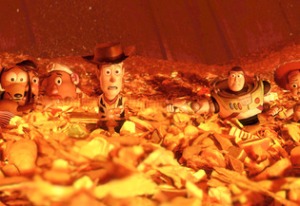 Similar to issues of working within the Save The Cat structure, screenwriters are also faced with the more detailed constraints of genre conventions. This is an idea that novelists are probably a bit more familiar with, especially if they write for a specific genre, like horror or crime. When an audience buys a ticket for a film, they expect the movie they see to fall in line with their expectations for the genre.

Romantic Comedies, for example, always start with the two romantic leads at odds in some way. Sometimes, we see them have a romantic connection but then something turns them away from each other. The important thing is that, as stated in Love Actually, “they don’t get together until the very end.” The tension of them not getting together is what makes the film so interesting. At the end of the day, though, we want to see them hook up! If a film doesn’t fall in line with this genre formula, then we, as the audience, feel a bit cheated.

And why shouldn’t we? If we buy a ticket to a horror film, we want to see The Conjuring, not Planes. So, as writers of movies, we can’t just “tell a good story.” We have to know how that story will be sold and make sure that we fall in line with the conventions of the appropriate genre. 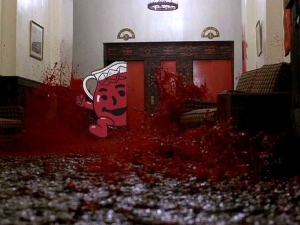 When I worked in the film industry, most of the feature scripts that I wrote were fantasies. This was back in the day when I was young and naive to how the industry really works. I knew that my scripts were good, and I got a LOT of great feedback on it, but none of those features sold. Sure, I had lots of shorts made and a few of my non-fantasy scripts gathered some interest, but none of the ones that I truly cared about went anywhere. And I had no idea why….

The truth is that, as a beginning writer, I hadn’t proven myself, and producers aren’t going to spend a lot of money on an unproven writer. Fantasy films are expensive to make, so the majority of the ones that you will see out on the market are based on pre-existing material. This isn’t because the producers that make films have no imagination. It’s because those stories have a pre-existing audience. The film industry has to be able to make its money back; it doesn’t have a never-ending source of cash, as much as we like to believe that they do!

So, as writers, one of the things that we need to do is keep in mind the business aspects of films as we are writing. If we have a great idea for a fantasy story, then we need to realize that we can’t just get the film of that idea made without proving the audience for that idea first. This might mean that we need to publish the novel of the story first or find a way to fund it and make it independently. 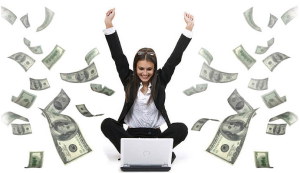 I’m always so proud when one of my former students options a screenplay, and I always count down the days after that time when I will hear from her or him, complaining about all the changes that the studio/director/producer/actor wants to make in that script after optioning it. The truth is that, as screenwriters, we are only one cog in a very large process of the filmmaking machine. Even if we wrote the story, it doesn’t mean that the idea that we first had will make it to the screen. Every person along the way wants to contribute to that overall machine of the finished film, and this will mean extensive re-writes on the path from getting sold to making it to the big screen.

As writers, we have to recognize that we are easily replaced. If we can sell our screenplays at all (and it’s extremely difficult to do that), we sell the copyright to the work. It’s no longer ours – it belongs to whoever purchased it from us (usually a production company). Once our screenplay has been bought, we need to be accommodating and friendly, happily accepting notes from anyone and everyone in an “above-the-line” position on the project. Even then – if we take every note and turn our family friendly comedy film into a hard core gritty NC-17 rated drama – there is still a chance that the production will hire another writer to rewrite us. Sometimes, this even means that we don’t get credit for our work. In these cases, we’ll be lucky to get a “story by” credit. 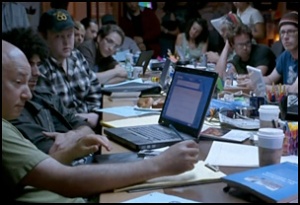 These are only four of the constraints that screenwriters need to face when writing for the movies. And if we want to work in the industry, we have to be okay with this. It’s a part of the system, and nothing that we say or do will change that.

So tell me, haiku writers and Twitter flash fictionists, do you still think you have more restrictions than we do??

This entry was posted on September 6, 2013, 9:15 am and is filed under Jennie, Working Within Constraints. You can follow any responses to this entry through RSS 2.0. You can leave a response, or trackback from your own site.