The Performance or The Page? Poetry’s Great Schism 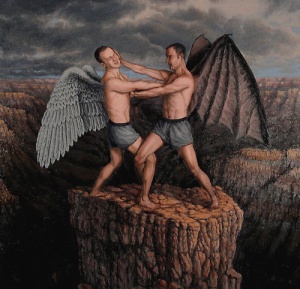 In the month or so since my last post, I had the pleasure of hosting a poetry reading to close out the local poetry contest I’d run over the summer. I invited all those who had entered a poem in the contest to come and read poem they’d entered along with one or two other poems should they be so inclined. And as I sat and watched the string of local hobbyist poets, an interesting thing happened in my tiny little brain: it occurred to me that perhaps a poetry contest shouldn’t actually be complete until the entrants have had a chance to read their poem to an audience. Now, it might seem kind of silly to you, but you have to understand—this was a game-changer for me. Having that thought cross my mind was like Sarah Palin casting a vote for Hillary, or Siegfried and Roy going on without the white tigers, or Lucy letting Charlie Brown kick the ball. It was wholly antithetical to the way I’d always been. It was weird.

See, I consider myself a snob, and a big, fat, hairy one at that. When it comes to poetry, I’m about as open-minded as Pat Boone with free Bonnaroo tickets. I believe poems should exist on the page and nowhere else. I don’t see any reason for or benefit in “performing” a poem nor do I see any reason for anyone to have to (shudder) “spit” a poem. Irony be damned, the art form known as poetry was meant to be sedate and reverential… or so I used to think. No matter that poetry began as an oral tradition to aid in the handing down of history through story-telling, it used to be that I wanted my poems alone on their pages for all to see and enjoy through the singular perception of sight. Who needed to hear a poem?

Note that I said, “used to be.” Yes, I used to believe poems should only be seen and not heard. And then I wrote some poems. Not long after that, people asked me to read those poems. Out loud. As they listened to me. And so I did.

And it was good…

Today, I’ve read my poetry aloud so many times, it’s kind of like watching the Space Shuttle land—an amazing technical feat, of course, but not really all that special anymore.

In “The Peril of the Poetry Reading: The Page Versus the Performance” (available here), a fantastic article from poets.org, David Groff offers this blunt opinion: “Only when we acknowledge that a poem performed is no substitute for a poem read in private will we truly advance the cause of the poetic word.” Reading this put me in a bit of a quandary, considering what had occurred to me at the reading two weeks ago—it at once reaffirmed my traditional view that poems should be seen and not heard, but challenged my epiphany at the poetry reading wherein I began to believe that the way a poem is heard can add poetic validity.

In essence, this then is the root of the schism currently dividing poets and spoken word artists where I live and across the far reaches of Poetryland. That snobbery I mentioned? I can’t deny it—it was frequently aimed at “spoken word artists” and “performance poets.” I always felt that their brand of poetry lacked the fundamental skill that I had seen in the work of my contemporaries. Listening to “performed” poems revealed the kind of slick word play and clever phrasing that my writing professors worked so hard to workshop out of me. I realized quickly that spoken word art relied on heavy doses of consonance and assonance and alliteration. In a word, I came to view spoken word art, performance poetry, poetry slams, whatever as gimmicky. Gimmicky is bad because it’s disingenuous and easy, but worse than that, it short-changes the artistry that poets work so hard to reveal on the page. Absent the elegance of enjambment and line integrity, stanza breaks, syllabication and meter, poems read aloud were little more than rap songs without benefit of drum machines and synthesized instruments.

Again—or so I thought.

My view of performance poetry has changed considerably since my early days of writing. I have a number of friends and colleagues whose work I respect and admire who, unlike me, do not write for the page, but for the performance. And their work is good. It holds up under scrutiny when viewed on the page. These friends and colleagues aren’t flippant or cavalier about the page as I’d come to believe most performance poets were. Their dedication to craft is evident in their work on more than one level. I’ve come to see that these poets aren’t necessarily trying to get over with clever word play and slick phrasing. Personally, I believe there is a degree of that inherent in spoken word art, but I’ve come to realize that there is room in the poetry world for both kinds of artists. In some ways, performance poets and their attention to the oral component of poetry are the true carriers of the flame—they are the ones directly echoing the tradition of the ancients, the warrior-poets who memorized in order to memorialize. Today, I tip my hat to them. I can’t do what they do.

And honestly? I’m okay with that. There’s room enough at the table for both of us. If it so happens that you fall hard on one side of the schism or the other, take a second and consider pulling back a little. As David Groff further notes in his article on the subject, the schism between page poets and performance poets involves an argument as to whether performance poetry is the death knell of modern poetics or the energizing force behind its resurgence. Why does it have to be one or the other? As a poetry and a fan of poetry, I’m just glad people are talking about us. Talk generates interest and interest sells books. Let the controversy continue!

This entry was posted on September 19, 2013, 9:18 pm and is filed under Linda, Ron, The Business of Writing, The Craft Of Writing, Writing Advice. You can follow any responses to this entry through RSS 2.0. You can leave a response, or trackback from your own site.