When I first started entertaining the idea of becoming a published novelist, I saw the path ahead of me as realistically as I could imagine. The first thing in front of me was a large mountain – writing the novel. 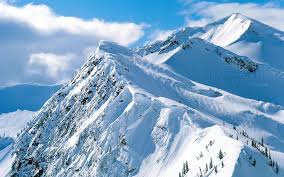 And while I wrote, it felt like I was battling orcs, dragons, trolls, wolves and every other thing that lingered in the dark places on mountains. Sometimes, while writing, I’d slide back down a slope, needing to go back and restructure or throw out and rewrite all together. Other times, I ran carefree up a path for a while as a chapter or a character just burst from my pen, practically perfect in every way. But most of the time, I battled the monsters of  insecurity over whether or not I could ever get the book done. Sure, I had fun along the way, but it was a fight to get to the top and finish that novel.

And for a moment, when I finally got to the top, I could feel the weight of what I had accomplished. I had this complete thing that was an artistic expression of who I was as a person.

But then the clouds in the sky ahead of me cleared, and I saw another, larger mountain ahead of me – getting an agent.

Again, I tackled the climb, and I fought off the beasties and low self esteem that comes with sending out creative work for the first time and getting rejections from that work. Agents not replying to my queries was hard, but the hardest part was when an agent would pass based on my query alone, saying it wasn’t for them without reading the actual pages. Fortunately, I found quite a few agents that loved the book, and I made it to the top of that mountain as well, albeit a bit more scraped up than after my first climb.

I started 2013 at the top of that mountain. I just secured my agent for my first book, and I was extremely excited to tackle the next big climb – getting my book published! Unfortunately, that mountain was so clouded by mist and darkness that I had no idea how difficult a climb this was going to be. Surely, I thought, getting an agent must be harder than getting the thing published right? Sadly, no.

In fact, almost a year later, I’m still waiting. My agent has sent out my book to dozens of editors, and most of them have said the same thing: “I liked it, but I didn’t love it” or “I really like the book but it isn’t right for our imprint.” And so we sent it to another house and another house and another house, climbing higher and higher up the mountain with no idea how much further we have to climb before we reach the top. How was I to know that this mountain would much be so much harder than that last?

And do you know what made this journey so hard? It was the lack of monsters. I had nothing that I could fight. All the editors had positive things to say, and you can’t rewrite based on compliments. All you can do is say “Well, if you liked it so much, why not publish it?!” After so many backwards compliments (“I liked it but didn’t love it”), the ultimate inner demon began to show up. It was a voice inside my head saying, “So, if your best isn’t good enough, then how can you ever improve and get published?”

Growing up in an art school and then working with the best writing group ever prepared me mentally for dealing with critical feedback. “If you want to scale this cliff, you need to put your anchor here, not there” or “Your rope isn’t strong enough to support your weight so get another one.” I can do something with this kind of feedback. I can improve my work and make it better. But not having any kind of constructive feedback at all? That’s been a tough pill to swallow.

Fortunately for me, I didn’t perform an amateur mistake. I haven’t been just sitting on my laurels and waiting for this one book to sell. Since that first book went into submission, I’ve been diligently working on additional novels. I’ve completed two more novels and a text book proposal to keep me from obsessing too much on whether my first book sells or not. By not putting all my gear in one backpack (am I taking the mountain climbing metaphor too far?), I keep moving forward even if my first book hasn’t found the perfect home yet. My writing quality has gotten better with each book, and I can now claim to have multiple novels in submission and not just one. This way, if we do get the final “thanks but no thanks” from the last two small presses that have my first novel now, I won’t feel left with nothing.

As a film director, I was always afraid of failure, and I think that, as a writer, this fear feels more intense because I’ve put my heart and soul into writing those stories. Pieces of me exist in those words, and so a rejection of them feels like a rejection of me. By writing multiple stories, I’ve spread myself out a bit. Now, a rejection of one book won’t feel like a rejection of all of me. Just a small piece. It makes it so much more easy to deal with.

In 2014, my plan is to keep climbing the mountain towards becoming a published author. It’s such a tough climb, I plan on celebrating when I reach the top. But this last year has taught me one very important lesson – there may be an even bigger and more ominous mountain behind this one. And I have to be ready for it.

If I had to offer wisdom to all you fellow writers out there in the world based on what I learned this year, it would be this: Don’t pack all your gear in one backpack, and never, EVER, underestimate the mountains that you need to climb in order to be successful in this industry. They can be really tough uphill paths filled with monsters and darkness. But at the same time, never lose hope. Because once you climb that mountain, you’ll never regret taking the journey.

This entry was posted on December 15, 2013, 2:24 pm and is filed under 2013: Looking Back, Jennie. You can follow any responses to this entry through RSS 2.0. You can leave a response, or trackback from your own site.