Do It For The Money by Melanie Neale

5writers is delighted to welcome back guest blogger Melanie Neale. Be sure to read this post all the way to the bottom for an exclusive 5writers exclusive submission opportunity!!! 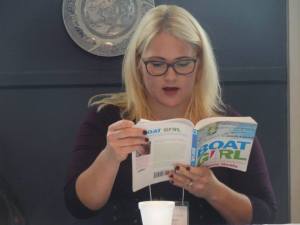 Melanie Neale grew up living aboard a 47’ sailboat, and holds a Bachelor’s degree in Creative Writing from Eckerd College and a Master of Fine Arts degree in Creative Writing from Florida International University.  She lived aboard her own 28’ sailboat while in graduate school. She currently works as the Director of Student Affairs for a private art college in Florida.  Melanie has published fiction, poetry and nonfiction in literary journals and magazines, and is recipient of several awards.  Her “Short Story” column appeared bimonthly in Cruising World Magazine from 2006 to 2009.  Boat Girl: A Memoir of Youth, Love, and Fiberglass was published in 2012 and the Middle Grades version, Boat Kid: How I Survived Swimming with Sharks, Being Homeschooled, and Growing up on a Sailboat (2013 Mom’s Choice Award winner), was published in 2013, both by Beating Windward Press.

Do It For The Money by Melanie Neale

There are two types of working writers.  Well, there are three, but the third type is the type that we all love to hate: the type who gets lucky and taps into something that earns lots and lots of money simply for their writing.  That type is super rare, and we only hate them because we’re jealous that they get to write full time while we slave away at other jobs.  Jealous that they have things like agents and book tours that are paid for by someone else.

Let’s get back to the two types. There are those who work in academia (usually graduating from MFA programs and scrapping for years as adjuncts until the finally get rooted somewhere permanently), and those who work in a job category called “other.” I’m an oddball because I work in academia but as an administrator.  For most of my writing life, I was an “other.” Each of these two types is valid and honorable, as long as you’re writing. And as long as you’re writing for love and not money. Because if you think you’re going to write for money, then you’re a.) not a writer or b.) really effing stupid.  Love makes me get up at 4 AM most mornings so I can write for the three hours before my toddler gets up and the chaos of an hour-long commute and long workday begins. Recently, I’ve started to see a little bit of money trickle in from my various writing projects, but only enough to pay for the occasional tattoo or nice box of wine. The way I see it is that if I can make ANY money at all for doing something I love, then I’ve made it. I still have to keep my day job.

About six months ago, my friend and indie publisher Matt Peters of Beating Windward Press posted something on his Facebook page about crazy jobs. Because I’m on Facebook all the time, I saw it as a chance to be obnoxious and try to “out-cool” everyone on the chain by listing the various job titles I’ve held as a writing adult (minnow-scooper, deckhand, adjunct professor, boat washer…). This other chick challenged me right back.  She’s a professional ghost-writer now, which is way cool, but her resume was as random as mine. She sold lava-rock sculptures to tourists, among other awesome things.

And Danielle and I aren’t alone. Some of my favorite people are people who have held the most random jobs. Sex workers, for example, are great. Because some of the ones I’ve met (like David Sterry, author of the memoir Chicken) are just so genuine and cool and open.  Nobody knows how to gauge people like someone who has worked in the sex industry. The more interesting your jobs have been, the higher your chances will be of being an interesting person.

As Matt, Danielle and I were going back and forth (Matt has had some pretty interesting jobs too), it hit us. This conversation needed to be taken further. It needed to be a book. Within a few days, we had drafted a concept, chosen a title, and set up a call for submissions for The Things They Did for Money. It would be an anthology of personal essays from writers and artists about some of the strangest jobs they’d ever taken in the name of supporting their art.

I love anthologies for their collaborative nature. Since writing is a lonely endeavor, anything that encourages collaboration is good. Danielle and I, who have never met face-to-face (or even talked on the phone) have become friends and have even branched, with Matt, out into another collaborative project. As submissions began to trickle in, we sorted through them the best we could. There were sex-worker stories, of course. A story about being a professional pilot. A story about working in a modern speakeasy. Reading these submissions, I started to feel more and more awe and respect for my brethren.  There are just so many cool people out there doing cool things.

We closed the anthology for submissions at the end of July, but we’ll extend the deadline until the end of August for readers of 5Writers.  Just put 5Writers in the subject line of your email.  Submission details are here. http://www.beatingwindward.com/callforsubmissions.html

What’s the strangest thing you’ve ever done for money?

This entry was posted on August 4, 2014, 6:51 pm and is filed under Guest Bloggers, Supporting Yourself As A Writer, The Writer's Life. You can follow any responses to this entry through RSS 2.0. You can leave a response, or trackback from your own site.