How A Hotdog Made Me A Better Writer

My mother refused to teach me to read. I was about 3, and she thought if I learned to read then, I would be bored when I started kindergarten. So I taught myself to read by studying my older siblings’ workbooks about Dick and Jane and Sally. (As the youngest, I really identified with Sally.) They had circled the word “tree” under the picture of a tree. Drawn a line from the word “up” to someone being lifted up. Fortunately my siblings were smart, and their answers were correct. My secret was blown when I started reading the billboards on the side of the road out loud.

Before I could write, I was a writer – making up stories (and not just thekind to explain how something mysteriously broke without the help of anyone in the house) and entertaining anyone within earshot. The problem was getting me to stop.

I planned a career in journalism – as a feature writer, not hard news. I liked telling stories, not reporting on events. You know the old adage about writing articles so the editor can cut from the bottom without sacrificing content? That didn’t work with my feature articles. They were stories with a beginning, a middle and an end. If they needed to be cut, I needed to rework them. One summer I worked as a stringer for The Ellenville Journal in Ellenville, NY. They paid me by the inch – which gave me another reason to milk those stories.

Then I wandered into the ad world. My first boss, Andy Ellis, charged me a nickel for every word he could remove from my copy. A week later, I owed him enough money to buy him lunch – a hot dog from a street vendor. It may not sound like a lot of money, but it translated into 60-80 words he’d put a red line through in a single week. 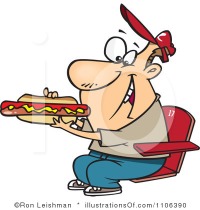 As he wiped mustard off his hands, I figured if I didn’t want to give up my lunch money once a week, I’d better start learning to say more with less. It wasn’t easy at first. I poured over award show books learning from the best copywriters out there. I watched what Andy cut – how he cut – and figured out why. And I learned. I learned to pay more attention to conciseness. I learned to make each word – heck when it comes to ad copy, each character – count.

There was an interesting freedom in writing plays. I was no longer bound by the :30 second TV commercial or the :60 radio spot or the meager amount of space my Art Director partner deemed the minimum necessary to convey the client’s message without messing up their beautiful layout. I could let my characters say what they wanted . . . give them space to breathe, to move, to think, to be.

And then I rewrote a full-length play to remove the intermission.

The show was an hour and 45 minutes – I was repeatedly told it was too long for people to sit without an intermission. (But wait, aren’t most movies longer than that?) If I seriously wanted to make this a single act, I needed to cut 15 minutes. I read the play over and over – I had already cut everything I could. Every scene was necessary. Every conversation moved the play along. Even the little details were important. Then I remembered buying Andy that hot dog. (And yes, countless cups of coffee and cookies and ice cream cones.) I went back over the script and cut a word here,a word there. Twenty minutes worth of individual words. Actors who had previously inhabited the roles couldn’t figure out what I had cut. In the same way I had taught myself to read – following the lines drawn by someone else – I had reached back into my past writing experience and drawn on – owned – something I already knew. I applied it to a different writing style. Allowing myself to be guided by someone else’s expertise both began a love affair with words and taught me to be a better writer.

Writing is writing is writing. Yes, there are different to reasons to write – thank you letters to your grandmother, emails to a friend, Facebook posts, the Great American novel. And yes, they’re all different forms of writing – they all involve different skills. But, at their heart, they are all about communicating an idea, sharing thoughts, helping someone feel what you feel, telling a story. If you practice writing – by writing – you grow as a writer. If you read with a critical eye, trying to figure out why that passage – or poem or entire book – captivated you, you grow as a writer. If you take something you know along to the next project, add a trick or two you learned along the way, you grow as a writer. Does that mean I always cut every single, extra, superfluous and redundant word? Of course not. Sometimes I use them for effect. But when I have to, I do know how – without crying about slashing my babies like some of my writer friends. (If you’re one of them, I’m not making fun of you – well maybe a teensy bit – but try putting them in a file somewhere. Pull them out, use them in a different piece and think of it as rescuing orphans.)

Take a minute to pull out something you wrote a decade ago. Read it with a critical eye. Pull out something you wrote last year. Read it with a critical eye. And now read the piece you’re currently writing. See a difference? Once you get past the cringe factor, you should see evidence of growth. Changes in your style that make your writing, smoother or more descriptive or more concise or more something. If not, well, I suggest you put down your phone, close your iPad, turn off your computer, step away whatever piece of technology you’re using to read this. Think back to a time when you had an Ah Ha moment in your writing or your reading. What makes that instance stand out? Was it a wonderful new concept you discovered? Or something you want to avoid? What can you learn from it? How can you apply it – or something like it – to what you are currently writing? How can you grow from it?

And if that doesn’t work, try buying someone a hotdog.

This entry was posted on September 30, 2014, 9:47 am and is filed under Growing Up A Writer, Linda. You can follow any responses to this entry through RSS 2.0. You can leave a response, or trackback from your own site.