Don’t be a Punk!: The Secret to Marketing Your Work

People who have never worked within the film industry are often surprised when I tell them about the ins and outs of how a screenplay gets turned into a movie. Well, maybe “surprised” isn’t the right word. “Shocked” or “flabbergasted” might be more appropriate – especially when I’m talking to writers.

In the world of prose and poetry writing, the words the author/poet puts onto the page are what will, eventually and after much editing, wind up being the final product the reader will enjoy. Yes, there are other stops along the way between writer and reader (editor, layout designer, etc), but for the most part, what the prose writer or poet creates is what the reader purchases. This allows for a real possibility of self-expression in these forms of writing. The writer has the opportunity to express her or himself through the story.

That isn’t the case with screenwriters.

In the world of screenwriting, the words the screenwriter puts on the page are merely a stepping-stone on the way to the final product. The audience doesn’t pay for the screenplay – they pay for the finished film.

Since the audience shows up for the movie and not the script, it means there are a lot more hands involved in the script to screen process. Producers, investors, directors, actors, designers, editors and dozens (if not hundreds or even thousands on the big budget bonanzas) of others all have a hand in the creation of the story.

Even other writers can be become a bigger part of the actual storytelling process than the original writer. Often, if a beginning screenwriter is fortunate enough to have their screenplay noticed by a studio executive or producer, they will find the script is rewritten as soon as it’s sold. The new screenwriter isn’t “proven,” so the producer brings on another writer he or she has worked with in the past to do a “draft” of the story before it moves forward towards production. And the original writer has NO SAY in this happening or even in how the story will change.

Unlike in other forms of writing, when the screenplay is sold, the screenwriter sells the copyright. No aspect of it is ever theirs again. The story doesn’t belong to the screenwriter in the same way as it belongs to a prose writer or poet.

Since this is how the industry operates (and NO, you aren’t going to change it), screenwriters will spend more time marketing themselves than their actual work. They will go to parties, take meetings, enter contests and basically do anything they can to make themselves as well known as possible. For them, it’s not about selling one script; it’s about getting jobs that allow them to rewrite other people’s scripts. They want to get the jobs that establish their career as a writer. This way, once they have proven themselves, they have a higher likelihood of seeing their own stories get made into films and not butchered by other writers.

Screw you. I’m doing what I want now!

When I transitioned from film writing into prose writing, I was surprised to see how many novelists spend more time marketing an individual book than they market themselves. On their Facebook pages or Twitter accounts, they would repeatedly beg people to buy their book:

“Did you like Twilight, then you’ll LOVE Fabio’s Lust!”

“Are you looking for something fresh this Christmas season? Then download A Walk In The Tinsel!” 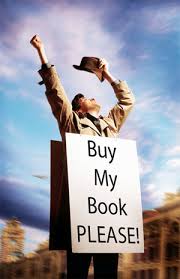 You don’t know me, but give me your money!!!

Okay, I made up the two titles above, but if I go on Facebook or Twitter this very second, I’m sure I’ll see another dozen. In one Facebook Group, there is one male writer who posts the same exact same book ad three times a week! Sorry, dude, but no matter how many times you post it, I have no reason to buy your book.

In a fantastic blog post from 2013, bestelling author Chuck Wendig referred to this bad form of marketing as “pepper spraying” people with their book advertisements. He begins his post by saying:

Dear People Who Have Written Books:

I don’t want to be advertised to.

Or, put differently: I don’t want to be strapped down while you advertise all over me in some acrid, splashy golden shower version of “marketing.”

Any salesman will tell you that the secret to making the sale is to develop a rapport with your buyer. This is why a traditional car lot will spend as much time with you as they can before they tell you how much the car is going to cost you. They will let you test drive your dream car, so you fall in love with its expert handling. They will ask you about your home life, so they can talk to you like they are your best friend. Many dealerships even offer you free food and sodas (the smarmiest of these are the ones where the salesman pulls out cash and “pays for you”). All of this is meant to make you feel good with the salesman so when he finally rips out that price tag, you feel bad about saying no – to him. 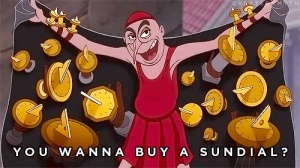 While it makes my skin crawl to think of writers as salesmen, I don’t think I have a choice about looking at myself this way. When we market our books, we are salesmen – whether we like the label or not. There’s no way of getting around it. Even though we are trying to sell a story, we are still trying to get money in exchange for a product.

So, when it comes time to market my prose work, I’ve decided to take a leaf out of my screenwriting days and focus more on selling me than my work. Whether you go to my Twitter, Facebook, Tumblr or any other social media page, you won’t see me mention my new textbook (“Now on sale!,” she said ironically) more than a few times. What will you see, however, is my attempt to build rapport with my readers.

Most of my followers are fellow writers, and I’ve worked hard to establish my credibility as an Educator. I post articles on the business, links to agents seeking clients, podcasts about craft, basically anything I can get my hands on that can help other writers with their writing. Everything I’ve done has been about educating others – not promoting myself.

As a result of my years of doing this, I have built a small but faithful group of followers. Many of them often reach out to me, asking for assistance or guidance with their careers. While I unfortunately don’t have the time to read their work specifically, I am always there to share with them my advice on whatever questions they may ask.

I give. I don’t pepper spray.

This past fall, when my craft textbook came out, we experienced high sales from day one. My followers – all those people who I had helped for years – wanted to help me by supporting my book. Why? Rapport.

So, when it comes time to market your work, my recommendation is to do what the screenwriters do – promote YOU, not your book. Make your readers fall in love with you before your book comes out, so they can show that love when it does.

This entry was posted on January 13, 2015, 8:54 am and is filed under Getting Published, Jennie, Marketing, The Business of Writing, Writing Advice. You can follow any responses to this entry through RSS 2.0. You can leave a response, or trackback from your own site.