When I applied to the School of Visual Arts back when dinosaurs roamed the earth, I remember filling out a lengthy form with dozens of questions about my life as an artist, my commitment to art, and so on. These were difficult answers to put into words simply because I’d never given them much deep thought. However, one question caused me no hesitation (no, it wasn’t “What’s your name!”). Which artist is your major influence? Now, maybe they were expecting Rembrandt, Michelangelo, Picasso or Pollock. Of course, I’d admit those guys were really good, but the artist that made me want to open a sketch pad and put pen to paper was Charles M. Schulz. Poor hapless Charlie Brown, always made the fool, but so endearing and lovable. Lucy, Linus, Snoopy, PigPen, Schroeder, Peppermint Patty, and all the other characters, whose personalities were so vivid and well-rounded, made the stories come to life. And that’s what it all boils down to: story. 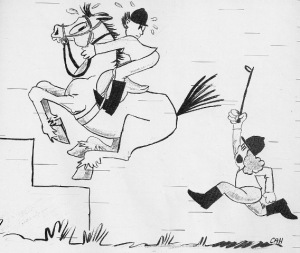 As much as I loved drawing my own characters, Schnickles the duck, Gertrude the horse and Jabalina, a little girl who spoke Spanish, what I really wanted was to tell a story, hopefully a funny one. It would be many, many years (remember, I had a pet brontosaurus) before I transitioned from drawing to writing flash fiction and short stories. I believe my early training as an artist, learning to think visually has helped my writing immensely. Those classic comic strips, Peanuts, Archie, Blondie and later Garfield, Doonesbury and Dilbert taught me about pacing, rising action, punchline (climax), and resolution. I learned about creating solid characters, character foils (protagonist/antagonist), motivation and a character’s wants and needs, their psychology—all from a few panels designed to make me laugh. Of course, as a young person (Yes, in the stone age!) I had no idea I was learning any of this. The process was organic. I internalized it. It became a natural rhythm in my life, the beats of storytelling.

The popularity of graphic novels doesn’t surprise me. In fact, I’m thrilled. The art, in many cases, is stunning, working, not merely as illustrations, but as an equal storytelling element to move the action forward. I can hope that another generation, particularly those not inclined to read text, will be attracted by the images, the characters and the stories, and find their own stories to tell, whether in pictures, words or both.

Enjoy some mini-stories! Check out these comics in the Washington Post.

This entry was posted on May 14, 2015, 12:27 am and is filed under Darlene, Influences. You can follow any responses to this entry through RSS 2.0. You can leave a response, or trackback from your own site.