Neil Simon Taught Me How To Write A Play

As a child my favorite author was Madeleine L’Engle, Beverly Cleary, Judy Blume, Laura Ingalls Wilder, Ian Fleming, C.S. Lewis, L. Frank Baum, Ray Bradbury, Roald Dahl, Alfred Hitchcock and whoever wrote the book I was currently reading. I was very non-discriminatory – basically if it had words that told a story, I would read it.

In high school I read The Importance of Being Earnest and Oscar Wilde quickly became my new favorite author, plays my new favorite genre. Then I read Neil Simon’s The Odd Couple which I only knew as TV show. I now have 4 volumes of the collected work of Neil Simon along with both his memoirs. I know it’s not in vogue to admire Simon instead of some of today’s edgier and more contemporary playwrights, but his work, more than any other playwright, influenced my writing. 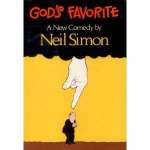 I devoured all of his plays. I loved the semi-autobiographical nature of many of them – reading them I realized I could write the stories of my life except with the freedom to make them funnier or more interesting or more complicated or more . . . you get the picture. Simon’s plays make you laugh in the middle of crying or starting crying while you are laughing – his plays, like life, aren’t just drama or comedy.

And the dialogue, oh the dialogue. For the first time I realized that there is an underlying rhythm in good dialogue. I love the story about an actress who wanted to drop a “non-neces

sary” word from a line of dialogue in, I think, Plaza Suite – something like “Oh”. They fought about it, and she basically said he couldn’t control what came out of her mouth onstage. During the performance that night she delivered the line as written. When he asked her about it, she said she realized that even though she didn’t like the “Oh”, the line didn’t flow right without it.

rereading and watching and dissecting Simon’s plays. But I was picking up dramatic arc and character development and structure. In fact, his early plays are written in 3 acts. Without realizing it, I had picked up on that format and early in my career, I found myself struggling to write 2 act plays.

My work tends to be a little “old-fashioned” in structure, at least that’s what the critics tell me. I’m

not out there pushing the envelope of what can be done on stage. I’ll leave that to playwrights like Caryl Churchill. But three times (yes, I keep count!) theatre professionals – a director and two critics – have described my writing as Simonesque. So apparently, he’s a good teacher.

Today the list of writers who influence me is much broader. It includes well-known names like David Lindsay-Abaire, David Mamet, David Rambo, (I’m sensing a theme here) Sarah Ruhl, J.K. Rowling and Joshilyn Jackson. It also includes the writers whose work you read on this blog. And writer friends you haven’t heard of – yet. I’d like to think that I will always be reading books and scripts and poems as well as watching plays and movies that inspire me and influence me. That make me want to be a better writer. That make me want to try new directions. And maybe push the envelope – a little.

Just like they say about food, “You are what you read.” I’ve read books, and watched plays and movies that taught me a lot about how NOT to write. I’m not suggesting you stop reading trash – after all, beach season is upon us! – but just make sure you know t

he difference. In high school, in the midst of heavy reading for my senior English class, I asked if I could write one of my many book analyses on The Ivy Tree, a romantic suspense novel by Mary Stewart. Mrs. Spears said should would allow it this once, because she thought analyzing the book alongside The Hunchback of Notre Dame, Rebecca and The Count of Monte Cristo would

help me to understand the core difference between “serious literature” and “fluff”.

Read, study, enjoy stories of all kinds. But if you’re going to pick up traits and habits, learn from the best. Believe me, they’ll be happy to teach you.

This entry was posted on May 23, 2015, 12:51 pm and is filed under Guest Bloggers, Influences, Linda. You can follow any responses to this entry through RSS 2.0. You can leave a response, or trackback from your own site.