In 2011, my father died of cancer. I had a great relationships with my dad, so, as you can imagine, this really sucked. When it came time to plan his funeral, however, I refused to let the event be depressing. My dad hated when things got too serious, always preferring campy action films to dramas, and never wanting to deal with heavy issues. Treating his funeral like… well, a funeral… would have been an insult to his memory. 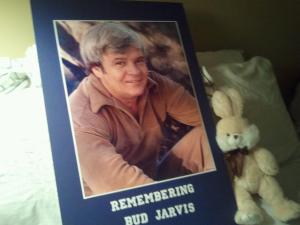 I started off the service welcoming the attendees with “Welcome to the roast of Bud Jarvis. Okay, probably not the best choice of words since he was cremated.”

Needless to say, more than a few people were a bit shocked. I distinctly remember my mom’s “Oh my God…” groan from the front row. My very wrong welcome broke the expectation people had about how to behave. The funeral didn’t need to be sad, and everyone who spoke after me threw away their uber-polite prepared speeches and spoke from their hearts, remembering both the good and bad things about my dad. There was a lot of people saying “Oh yeah, he did do that!” and even more laughter. It was the perfect send off for my very silly father.

When the service was done, every single person in the room agreed with my decision to remember my dad for who he was and not fall prey to the expectation of what emotion we should express at his funeral.

It’s easy to say that funerals should be sad, while other life events, like weddings or childbirth, should be happy. But life is so much more layered and complicated than that. Human feelings are messy and layered. They aren’t easily defied or predictable – just ask anyone with a hormonal teenage child. You never know what to expect.

When it comes to my writing, whether it’s for my screenplays or my novels, I try to remember the complications of humanity any time I have a character expressing emotion. Instead of giving that person an expected response to a stimulus, I try to flip the script and make it a bit messy. I try to make the person more three-dimensional and complex. I try to make that character human.

It would be easy for me to say that my protagonist is happy when he wins a scene goal, but what if he isn’t? What if he is sad about winning? Or what if a character is disappointed about something overwhelmingly good?

This is not to say that I will have my character feel something that doesn’t work in the context of the story. When I mix up the emotions, I do so with the intention of making the character more interesting but not insane. I’m challenging myself to make sure I’m not just picking an emotion because it’s easy. I avoid the stereotypes of how a person should feel and make sure that I’m giving them an emotion that makes sense for that character in the moment.

The spectrum of human emotion is so complex that we would do our characters a disservice by not allowing them to play across the rainbow of reactions they could feel in a moment. Limiting them to stock responses can prevent our readers from completely buying into the humanity of our story.

I offer this writing exercise to writers out there looking to make more emotionally complex characters:

Which scene felt the most complex? The messiest? The most human? It may not be the scene that combined all four emotions, but isn’t it worth giving it a try?

This entry was posted on February 23, 2016, 7:55 am and is filed under Emotions, Jennie, Responding to Writing Prompts, The Craft Of Writing, Truth in Writing, Writing About Death, Writing about Death, Writing Advice. You can follow any responses to this entry through RSS 2.0. You can leave a response, or trackback from your own site.