The Birth of a Novel; or, How I Got the Idea for The Intersection by Brad Windhauser

The Birth of a Novel; or, How I Got the Idea for The Intersection by Brad Windhauser

I grew up in LA’s San Fernando Valley and then moved to San Diego for college. Graduate school drew me east, and in 2000 I moved to Philadelphia. Immediately, I loved the more urban environment than any other place I’d lived. In 2003, I bought a house in a neighborhood in Center City, one that I would later learn was gentrifying. I had never heard this word before, although I learned quickly what happens when a new wave of homeowners descend on a neighborhood and bring a whole lot of change with them—a type of change that often pushes long-time residents out, ones who can no longer afford (due to increased taxes or higher rents) to live in the neighborhood that had been their home for years. In some case, we’re talking decades, long before a part of town became the next “up and coming” area. This very real situation tends to breed animosity and tension.

One day, after I’d lived in my new home for about a year or so, I was driving to a neighborhood Laundromat. I was about to make a right hand turn when a bicyclist blew by my car on the right side. He wasn’t wearing a helmet and he happened to be African American. When I caught my breath—the thought of nearly injuring a person rattled me—I got a thought: what would happen to a neighborhood like mine if a white driver (like me) hit an African American person on a bike? What would that do to the tensions surrounding gentrification?

Thus was born the idea for my new novel The Intersection. 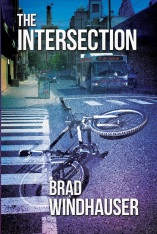 When I got home I started freewriting: who would be directly or indirectly affected by this accident? I had the driver and the bicyclist. What about the bicyclist’s parents? What about various neighborhood residents? Who would be most vocal about the accident? Who stood to benefit from gentrification? Who stood to lose? If I was going to write about this important—and contentious—issue, I knew I needed to consider as many varying points of view as possible.

When I had a sense of the types of characters I would use, I had to think about their individual worlds—where did they live? Where did they work? What was their personal stake in gentrification? I didn’t want to write a message story—those almost always come across as preachy—but I did want to examine people, and in so doing, I aimed to put a human face on this topic in order to encourage people to discuss this issue. I never intended to dictate: this is how you should feel about this issue and this is how you address it.

I wasn’t after presenting the solution; I aimed to accurately represent the problem.

I also knew that I couldn’t rely on my (limited) experience to provide a deep understanding of all that is involved in this issue. Sure, my point of view would shape the story; however, I needed to better inform that point of view. So I started my research. I checked out several books from the library, including books on Philadelphia’s history and how its various neighborhoods developed. I found a series of narratives collected from the Forgotten Bottom neighborhood in Philly. I also read about Pittsburgh’s own gentrification downtown as well as parts of New York City.

These books didn’t given me specific content to include; however, I did develop a better sense of how gentrification starts, how it unfolds, and how people react to it—this informed how some characters felt and how they addressed it. There was no one “truth” as to how gentrification happens or how people feel about it—this research did, however, give me patterns from which to draw.

The drafting and revision stages further allowed me to develop who these characters were, how their lives would intersect, and, eventually, what their storylines would all build to. The finished product was not what I had in mind when I started, but the inspiration, that almost-accident that inspired it, still sat at the core of the story.

I’m glad I was paying attention that day in my car: not just to the bicyclist but also to the idea that formed. The thing about inspiration is not getting fully formed ideas but how to listen to those sparks of ideas and how to put those sparks to use in your work.

Best case scenario: my book will inspire people to talk about the people and issues in The Intersection. Maybe this too will inspire more dialogue within communities and inspire some change in how we hold neighborhoods together.

Check out his novel The Intersection: When a white driver critically injures a black bicyclist, the residents in a tense, gentrifying South Philadelphia neighborhood can’t decide whether to unite, hide, or explode. You can also follow his work at http://www.BradWindhauser.com.

This entry was posted on September 8, 2016, 11:45 am and is filed under Brad, Guest Bloggers, Inspiration. You can follow any responses to this entry through RSS 2.0. You can leave a response, or trackback from your own site.